Find the best sportsbooks accepting players from the US!

With the USA being the largest market for video games in the world, it is no surprise that the market for esports betting in USA is ready to boom. We have gathered together some of the key information you need to know about this topic; including the best betting sites, bonus offers, banking options and any issues arising from legalities.

Online gaming has had a long and complicated history in the USA, with companies struggling to provide entertainment for their customers whilst simultaneously striving to circumvent legal issues and exploit loopholes. Fortunately, there are now two very popular American operators that offer esports betting sites for United States citizens, being:

Bovada: A great source for US gamers, Bovada also has a rich section for esports fans to enjoy. You can bet on Dota 2, CS: GO, League of Legends and others. As with BetOnline, it accepts both USD and Bitcoin as currencies.

BetOnline: this site has been one of the most popular, US-friendly destinations for sports betting since 1991. Its esports section is clear and easy to navigate, with tournaments offered on Counter-Strike: Global Offensive, Dota 2, League of Legends and Starcraft. It accepts customers from all 50 states.

It can be tricky for North American gambling fans to find free bets and bonuses because of all the laws and legalities which differ from state to state. For this reason, we’ve briefly listed some of the perks which BetOnline and Bovada have to offer.

Bovada treats new customers to a 50% e-sports sign-up bonus, which can go up to USD$250. After placing a real-money deposit, they will match your amount within 30 minutes. This promotion can be used across all e-sports betting markets available on the website. Bovada esports betting in the USA comes with so many positives; it’s hard to keep up!

Bovada also has a Bitcoin bonus. Make a deposit using this cryptocurrency immediately after signing up, and the website will give you a bonus of 50% up to $500. The bonus code is BVSBITCOIN50.

All new customers are eligible for up to $50 in free bets upon signing up. This offer applies to your first ever sports bet, including esports. This promotion will compensate for any losses up to a maximum of $50 on your first bet.

BetOnline also greets newbies with a generous welcome offer of a 50% welcome bonus up to $2,500. The bonus code is NEW2500.

Last, but definitely not least, is BetOnline’s 100% Bitcoin Bonus. Your first deposit (minimum $20, maximum $1000) with this currency will be matched 100%, thus doubling the amount in your account.

Available payment methods for US players

Because the USA has far more restrictive gambling laws as compared with the rest of the world, North American citizens may encounter more difficulty when deciding on methods for depositing into or withdrawing from, online accounts. Having said that, there are plenty of ways to transfer money from the web to your wallet, and we’ve listed a few possibilities for you below:

E-Wallets
These are some of the most popular methods for online punters, due to their simplicity and guaranteed security. When it comes to online esports betting PayPal, Neteller and Skrill (previously Moneybookers) are all good choices. E-Wallets act as middlemen between your bank account and online earnings, though, on the slightly negative side, some may come with a small withdrawal or transfer free.
Credit Cards
Fast and safe, this payment method usually supports withdrawals within 72 hours. MasterCard, Maestro and VISA are all commonly accepted, but American Express is not. Payment by credit card is a method that is recommended all over the world due to its security, speed and trustworthiness.
Prepaid Cards
These also provide a fast and simple method of transferring money. However, make sure that, when you purchase one, it is marked for international and online purchases. These cards are normally branded with VISA or MasterCard.
Cryptocurrency
Thanks to the current Bitcoin and Litecoin craze, these currencies are becoming increasingly popular with online gamers. USA esports betting sites are offering attractive and lucrative promotions in order to welcome new users and customers using either Bitcoin or any other type of cryptocurrency. For esports betting USA Bitcoin or Litecoin is definitely the way to go!

Is esports betting legal in USA? 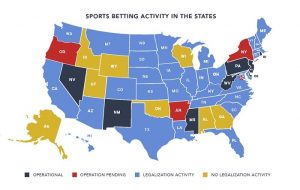 Due to legal issues regarding banking transactions between betting sites and financial institutions, it’s recommended that online punters from the US bet offshore when it comes to gambling websites. Is esports betting USA illegal? It’s a grey area.

This is why USA esport betting sites are based in domains where betting is legal. However, many of these sites will not accept players from the USA – which is where Bovada and BetOnline come in. The latter accepts players from all 50 states, whereas Bovada prohibits citizens from Delaware, Maryland, New York, Nevada and New Jersey.

Gray area or not?

With the esports gambling industry being an emerging market, some countries have fallen behind when it comes to organising suitable regulation for it. The USA are one of the countries stuck in this situation, mainly because it can be difficult to define what esports actually are. In most cases, the word “sports” doesn’t fully fit due to it being video games, which puts it in a grey area. This confusion has also led to delays in regulation, which opens the door to exploitive gambling platforms.

A step in the right direction

With this being said, in May 2018 the US Supreme Court struck down PASPA (Professional and Amateur Sports Protection Act of 1992) after a lengthy campaign. PASPA had created a nationwide ban on all sports wagering, making it illegal for anyone in the United States to make, offer, or accept wages on single-game sporting events.

Which esports games can US players bet on?

Bovada and BetOnline offer fans of online esports betting USA a range of the most popular esports games, from prominent developers such as Riot Games, Valve Corporation, Blizzard Entertainment and Hidden Path Entertainment.

These video games are divided into the different categories of FPS (first-person shooter), RTS (real-time strategy) or MOBA (multi-player online battle arena). Most competitions are multi-player, organized by professional players.

Those who play video games as a professional sport have now started to be recognized officially as legit athletes, though not without controversy.

Here is a list of the most popular games that are available to US players:

North America is one of the largest esports markets

Esports has grown to such an extent in the USA that professional gaming is now being considered a legitimate career, with some of the biggest and most-watched tournaments being held in various states around the nation. In 2015, the global esports market generated $325 million of revenue, with even larger totals predicted for the following year. The mobile industry now owns about 42% of the current market and is estimated to reach 50% by 2020.

One of the biggest pioneers in the esports industry is none other than Major League Gaming (MLG), whose headquarters are in New York. They are now regarded as one of the most respectable and leading names in esports, with prize pools of hundreds, if not thousands, of dollars. Their events draw millions of viewers, a figure that has ballooned in size over a total of six years.

Riot Games is certainly one of the game developers which have made a splash in the world of video entertainment – and, thus, esports. League of Legends is one of the most sought-after games on USA sports-betting sites, and now that LoL professional gamers have been legitimized as real sportsmen, they travel to the USA in droves to compete against rosters and teams from across the globe.

The connection Millennials have with esports

And what about the so-called ‘Millennials’, the generation that grew up with, and assimilated faster than anyone into today’s digital world? Well, the NBA owns the esports fans among them, as they’ve now got an esports league of their own. The first tournament opened the first week of last April under the name “NBA 2K eLeague”

To conclude, the future of esports in the USA looks bright. It’s popular; it’s fun, and popular even with gamers who don’t usually play video games. CSGO betting from USA is now made easy thanks to sites like BetOnline and Bovada; US citizens all over the country can take part and be included in the latest online craze to hit the betting world. The community is still expanding at an explosive rate, and should you feel inclined to participate yourself as a gamer or entrepreneur, now is a good time as any. Strike while the iron is hot!