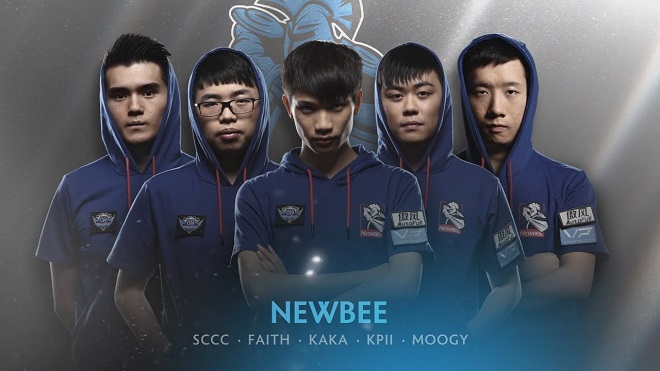 Newbee is a large Chinese team which specializes in Dota 2 championships around the world. The team has enjoyed many lofty achievements that have put both the players and the team into a top-ranking position in the world of competitive gaming. Newbee first got their start in 2014, and since then they have developed many teams specializing in different games and modes of play. The primary focus of the team is Dota and Hearthstone but they have dabbled in a few others as well.

While Newbee roster changes from time to time, the current team is comprised of five players who are skilled enough to beat the world’s best players. The team captain is Faith, and then there is Kaka, Moogy and Sccc.

Among the team’s most impressive achievements is the impressive amount of money that they won during the same year they started playing, in 2014. For their hard work in and leading up to the International 2014 competition, Newbee took home a jaw-dropping $5,000,000 which was a win large enough to give the team a taste of things to come, as well as showing the world that there was a new force on the scene that would not go unnoticed.

Over the years, Newbee has won some truly impressive prizes for the expert gameplay. The largest amount of money that the team has won in one game so far was in the International 2017 competition. It was there that they were able to take second place and a whopping 3.9 million dollars. The team’s win in the International 2017 was hard won but they succeeded as a result of good strategy and teamwork. To take home the prize money, Newbee defeated many world-class teams, such as LGD, Forever Young, Invictus Gaming, and Evil Geniuses.

Another notable win was the Dota 2 Professional League during season 2. The main opponent of that match was IG Vitality who was a very tough competitor but ended up folding under Newbee’s pressure. Out of three games, IG Vitality won none of them, giving a shut-out win to Newbee. For their prowess in that matchup, the team was able to take home a quarter of a million dollars.

More recently, at the ESL One Genting – held in 2018, Newbee took home yet another triple-digit win. After besting everyone along the way, through qualifying games, main event matchups, semi-finals and finals, the team was able to secure themselves a win of more than $160K. Though that final win was not easily taken, it was well deserved for their fantastic playing.

So far, Newbee has won approximately $12,500,000 which is an amazing figure considering how long the team has existed. They have managed to rack up their millions in just a matter of a few short years, and when you look at their recent successes it is pretty clear that these guys are going to continue stacking their money.

This website uses cookies to improve your experience while you navigate through the website. Out of these, the cookies that are categorized as necessary are stored on your browser as they are essential for the working of basic functionalities of the website. We also use third-party cookies that help us analyze and understand how you use this website. These cookies will be stored in your browser only with your consent. You also have the option to opt-out of these cookies. But opting out of some of these cookies may affect your browsing experience.
Necessary Always Enabled

Any cookies that may not be particularly necessary for the website to function and is used specifically to collect user personal data via analytics, ads, other embedded contents are termed as non-necessary cookies. It is mandatory to procure user consent prior to running these cookies on your website.