Read our Bethard review and get a €100 bonus

Relative newcomers to the online betting business, Bethard came onto the scene in 2014. They quickly established themselves as a tough, no-nonsense brand, with an image that challenges its players with the slogan ‘winners dare more’. Fronted by the deadly duo of Swedish UFC fighter David Teymur and Serbian hard-man actor Dragomir Mrsic, a visit to the site makes it clear that Bethard means business.

The company is registered in and operates out of Malta, with licenses under regulation by the Maltese Gaming Authority. The Bethard Group also holds some games under a Curacao license.

As a serious online bookmaker, Bethard was bound to venture into the arena of esports before long, and we’re happy to say that Bethard now offers a solid range of options for esports enthusiasts.

Although Bethard is not exclusively an esports betting site, the sportsbook has made a real effort to provide a good service for esports fans. Offering good odds, and with a wider range of games available than many of its competitors, Bethard is a good choice for these types of wagers. Added to this, Bethard is trustworthy and fully licensed, so players can feel confident that their money is in safe hands. The theme of the site may not be for everyone, but it’s sure to appeal to the majority of people who wish to place bets on esports tournaments. 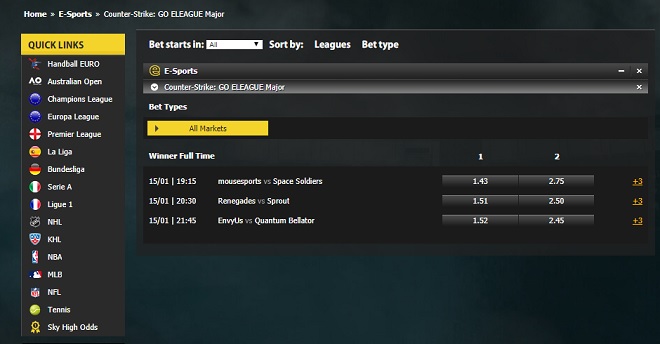 As well as offering an exhaustive list of traditional sports in its sportsbook, Bethard.com has made the decision to include esports betting into its repertoire. This is in keeping with a lot of other sportsbook providers, as it has become apparent that esports is a large and lucrative market. Competitive video-game playing is probably the newest sport on the block, but it’s quickly become very big business indeed, with a massive following and huge prize funds on offer.

The Bethard esports section includes the all-time favourites all in one place: Counter-Strike: Global Offensive (CSGO), League of Legends and Dota 2. Also included are Halo, Overwatch and even VainGlory, which can be hard to find on an esports betting site. The games and tournaments are regularly updated to reflect the current happenings in the esport world.

The esports section can be found by navigating to the sports page from the home page. Then clicking the esports tab will take you to all the forthcoming tournaments and events on which Bethard are offering odds.

The site has a separate section for live betting, and esports are represented here too. Simply go to the Live Betting section of the website, and any live esports tournaments or matches will be listed on the left-hand side of the page.

Keen gamers have been organizing their own tournaments for many years now. In fact, the earliest big championships were held as far back as the 1990s. However, it wasn’t until the early 2000s that the idea really started to take off. Online streaming services, such as Twitch, gave accessibility to larger global audiences and helped to popularize the sport. At the same time, game developers started organizing competitions, with massive prize funds totalling millions – a dream come true for many gamers. With such money on offer, and so many people interested, it’s no wonder that spectators wanted to place bets on the outcomes of matches, and thus esports betting came to be.

League of Legends and Dota 2 are two of the most well-established and popular esports on the scene. Although they are from different developers – LoL is published by Riot Games, and Dota 2 is from the Valve Corporation stable – both games can trace their origins back to the Warcraft series. As they share the same roots, gameplay is similar for both, with two teams competing to destroy a key structure belonging to the opposition. CS:GO is a shooting game, and in the professional mode, it is extremely challenging, because when your screen avatar is killed by the opposing team (or indeed by accidental friendly fire), there is no second life granted.

Pro gaming competitions for Overwatch started in 2016, very shortly after its release. Developers Blizzard Entertainment has created a professional league, similar to pro sports leagues in the USA, with the first season opening in 2018.

The most recent addition to the esports stable is PlayerUnknown’s Battlegrounds (PUBG) which is a little different, as large numbers of individuals and teams can play at the same time. The first pro-gaming competition only took place in 2017. As a recent addition, and with relatively complex gameplay on which it is challenging to predict odds, few bookmakers are offering odds on this game at the moment.

Bethard offers different types of bets on the various tournaments and individual matches. The most common one is to bet on the outright winner of a tournament, but there are also over/under odds, and punters can also bet on which region will win in certain competitions.

The default display for odds is a decimal format, so, if you prefer to view fractional odds, you’ll have to remember to select this from the drop-down menu at the top of any page.

At present, there is no bonus code specific to esports at Bethard. New members to the sportsbook can take advantage of the site’s welcome bonus, which is a 100% first deposit bonus up to €100. Remember to choose the right bonus (for sports players) option when you join the site.

Although there has been no esports bonus code 2017, keep your eyes peeled in 2019 in case any are offered.

As always, bonuses are subject to wagering requirements – in this case, the bonus must be played through 14x, and bets on odds lower than 2.00 will not count towards the requirement. Bonuses are available to players from Sweden, Norway, Finland, Germany, Austria, the Czech Republic, Canada and Switzerland.

Mobile betting is available directly through the mobile version of the website, but Bethard doesn’t take half measures, which is why they boast a fully-fledged mobile app, allowing subscribers to tune in when they please. The app is available for iOS from the iTunes store, and, for Android users, there are instructions on the website as to how to download it directly from the website.

There’s plenty to keep you interested at Bethard, and account holders even have access to a feature called The Quest, which has daily challenges with various rewards. The site provides users with a sportsbook with more than thirty categories.

The website is available in English, Swedish, Finnish, Norwegian and German. The theme is clean and unfussy, with a dark background and yellow highlights on the most important links. The interface is very user-friendly and the whole site is simple to navigate. Unfortunately for those bettors who are unfamiliar with esports betting, the site doesn’t contain any hints or tips for how to get started, so it’s necessary to look elsewhere for these.

With a number of deposit methods, including Visa, MasterCard, Paysafecard, Trustly, Neteller, Skrill and Zimpler, players will always have a suitable option for their purposes. What’s more, making deposits and withdrawals is as easy as pie, once players have signed up and had their account verified. Bethard is known to have some of the fastest payouts in the industry. Deposits are added to the account as soon as they are made, and withdrawals can be in the player’s bank account minutes after transfer. However, players need to be smart when making deposits and withdrawals, as welcome bonuses are only given to those making their first deposit via Visa or MasterCard. Thereafter, it may be preferable to switch to one of the e-wallets, such as Skrill, as these have the fastest times for withdrawals. Payments via bitcoin are not yet allowed.

Players should also be aware that the processing time of the very first withdrawal may be a little longer. This is simply because Bethard needs to verify the account holder’s details, to prevent fraudulent accounts and illicit activity, and to provide a safe player environment. However, this process can be sped up, as players are given the option of uploading all the necessary documentation into their accounts ahead of time, instead of waiting for the prompt from customer support.

As previously mentioned, the Bethard website itself is quite user-friendly and guarantees a streamlined user experience. The site features clear prompts, calls to action, simply explained terms and answers to FAQs, plus an overall clean and uncrowded dashboard. However, no betting operator is complete without the backbone of the people who make it, and in this respect, all Bethard customers are well covered. The professional, hardworking and multi-lingual customer service team can be reached 24/7 via the live chat, by email or directly through the app or website. At this time, there is no phone line to speak directly to a customer service agent, but the live-chat function should be enough to solve any issues satisfactorily. Bethard promises to have all queries answered in the shortest time possible, and prides itself in providing VIP-level support to any player.

(image: esl-one.com) Following the delay of several CSGO events, including the ESL One Rio event that was set to take place from 11th – 24th read more

Does Valorant have a future as an esport?

Riot Games recently dropped the beta for the long-awaited and heavily hyped first person-shooter (FPS), Valorant. Since day 1 it has been made clear by read more

(image: Glenn Carstens-Peters on Unsplash) Over the past several years the PlayStation 4 from Sony and the Xbox One from Microsoft have been battling it read more

The Professional Overwatch League team, Atlanta Reign, announced today that they have locked down a sponsorship with McDonald's. Despite being April 1st (April Fools) and read more

(Image: Unsplash.com) With the rapid advancement and growth of the esports industry, there are many areas that are keeping up to speed, but some are read more

One of the biggest events in the CS:GO calendar is returning from February 24th to March 1st. The Intel Extreme Masters (IEM) Katowice event has read more